For years now, Fukuoka has been an active member of the global startup community. While travel is not advisable at the moment, that hasn’t lessened our commitment to this community. Our team is still working with local and international entrepreneurs to develop new and exciting businesses.

This August, Fukuoka City connected with Latitude59 in Estonia to host a hybrid in-person and digital event. We have an MoU for mutual startup support with Estonia, and their outstanding Latitude59 event is always a startup favorite. This year, we just had to get creative in order to hold our annual pitch event and switch to a virtual booth. Twenty companies participated in the event as One Team Fukuoka, each motivated to learn more about global expansion. Companies from Fukuoka also joined as there is great interest in Estonia’s advanced technical startups.

Even though the pandemic has halted travel and in-person interactions for the near future, it has not decreased our startup spirit! Three companies from Fukuoka and three from Estonia battled it out to receive support from the startup powerhouses on the Yellow Stage at Latitude59.

Mayor Takashima began the event by showcasing many of the reasons founders choose Fukuoka as their ideal startup location. With our growing population, proximity to global business hubs, numerous universities, and outstanding quality of life, it’s not hard to see why so many people love to call Fukuoka home. Mayor Takashima also mentioned several cases of Estonian startups that are currently thriving in the Japanese market aided by Fukuoka's startup support, including K12 Technologies OÜ, Stigo, GReat OÜ, and SAULE Technologies. 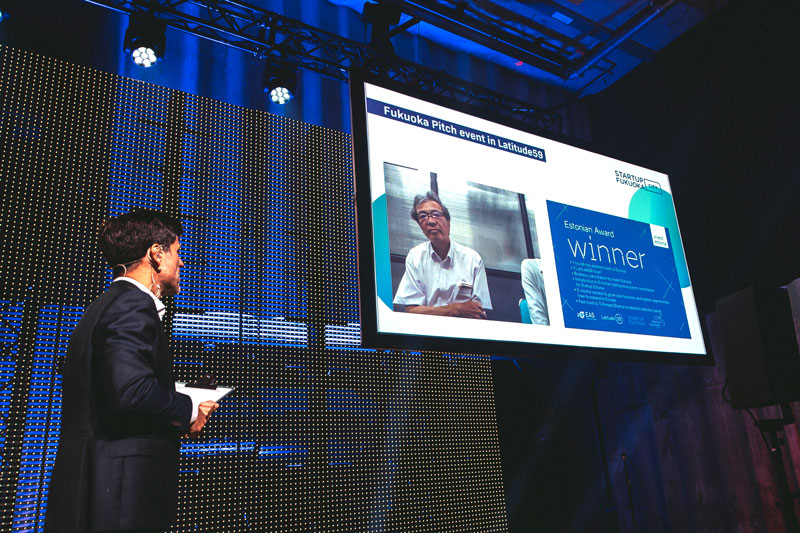 This AI-powered image recognition platform examines roadsides, bridges, and tunnels to perform safety inspections and locate damage. By using their inspection robots and drawing services that leverage AI, they can reduce the instances of human error caused by the industry’s labor shortage. To verify their solution’s usability, the team recruited international students without field knowledge to test it, with promising results.

After ON-GRIT ENGINEERING’s pitch, the judges requested more information about the team. They explained that there are five members conducting external inspections, while other personnel are working in-house on business matters. The judges also wanted to know about their business model and monetization plan, which they explained is based on inspection fees and selling the robots ON-GRIT ENGINEERING creates.

The Estonian panel chose ON-GRIT ENGINEERING as the Estonia Award winner, citing their business's innovative aspects and the vast potential for local partnerships. ON-GRIT ENGINEERING will receive a round-trip ticket to Estonia and a ticket to next year’s Latitude59, as well as access to local mentors and consultation services.

Fukuoka’s judges heard from PowerUp Fuel Cells, who shared information on the company's hydrogen fuel cell based electric generator. The generator is silent, it doesn't require any maintenance, and it's compact, making it a revolutionary advancement in the field. It also provides about 400W of continuous power while producing 100% sustainable energy.

After the pitch, the Head of Marketing answered the judges' questions. Fukuoka's judges wanted to know more about the generator’s safety. He explained that while hydrogen is flammable, it is not more dangerous than other options because it is a light element meaning it will rise and dissipate if there is a leak. The Fukuoka judges also wanted to know the generator's cost when compared to a traditional diesel engine. He answered that the generator does not require maintenance, leading to long-term savings.

Fukuoka’s judges chose this team as the Fukuoka Award winner, giving them a round-trip ticket to Fukuoka, a year of free access to our co-working space, and free business consultation services.

Looking to the Future

While neither team will be able to redeem their travel prize at the moment, they are both eager to begin expansion plans. Both are already assessing the marketplaces in their destination country. Once COVID-19 restrictions ease, they will be on the ground.

With events like Latitude59 incorporating digital components, the global startup ecosystem is still able to connect and exchange ideas. Despite these uncertain and unstable times due to the pandemic, Fukuoka’s startup community is still moving forward. Our startups are tapping into their imagination and ingenuity (and getting some help from technology) to safely build plans for global expansion.